Congratulations to our sponsored player and coach Dan Travers from Scotland who won the World Seniors Men’s Singles over 60s title in Kochi, India.  Despite struggling with torn ligaments in his left foot Dan beat second seed Arnold Dendeng of Sri Lanka, 13-21, 21-16 and a thrilling 26-24 in the final game. Dan and partner Christine Black (also Scotland) won a silver medal in the over 60s mixed doubles.

Check out Dan’s interview with the Indian press given during the event. 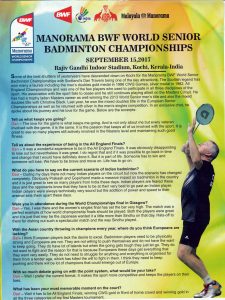